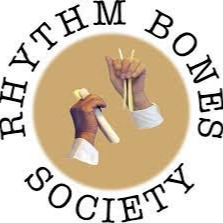 Organized on the back porch of the home of the late Russ Myers and his wife Wilma on September 23, 1999, 34 people signed the By-Laws creating of the Rhythm Bones Society (RBS), a organization whose purpose, as stated in the first issue of the newsletter, is “to preserve, educate, communicate and foster development of rhythm bones sounds and music.” Seven rhythm bones players were elected to the Board of Directors to lead this new society.  The current members are:

A bones festival was the vision of the father of RBS, Everett Cowett.  Annual Bones Fests began in 1997 organized by Ev Cowett at the urging of who might be called the grandfather of RBS, Dr. Fred Edmund, maker and seller of rhythm bones and a great instructional video. The Museum Exhibit titled ‘Bones Fests Highlights’ reviews of each Bones Fest.

What do you give a father who doesn’t want anything? For Martha Cowett, on December 4, 1998, it was the Rhythm Bones Central website  (click HERE to see the original Homepage) now with the address rhythmbones.org. This website is the source of much information about rhythm bones, and is where many people were and are introduced to the Rhythm Bones Society. In 2021 the website was updated using the WordPress platform.

At the first Board of Directors meeting, the Rhythm Bones Player newsletter was authorized with Steve Wixson as Editor. Articles have been authored by a large number of people with occasional reprints from other sources. To date, there have been 87 quarterly volumes published   The Museum Exhibit titled ‘Search The Newsletters’  presents those newsletters.

The minutes of Board and General Membership Meetings are in the RBP newsletters, and an index to them is below.