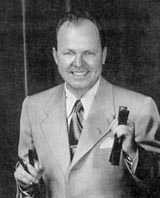 Ted ‘Mr Goon-Bones’ Goon was a very successful rhythm bones recording artist in the late 1940s and early 1950s, rising to seventh on the Billboard Jukebox Charts. This and supporting pages document the rhythm bones life of Ted and in part show what it takes to be a major recording artist.

Most documents are in Adobe Portable Document Format (.pdf), and most of the text is searchable using the Adobe PDF ‘Find’ feature, the exception being some text in Ted Goon’s scrapbook.

This compilation was produced by Steve Wixson of the Rhythm Bones Society, and is copyrighted to protect the information contained. Sincere appreciation is given to Ted Goon’s son, Robert, who loaned us his father’s scrapbook and some original recordings. Other information presented here was obtain by searching the internet, a telephone interview with Ted Goon and where required purchasing a few recordings.

Ted also made bones that were trademarked with ‘Goon-Bones.’ To find the sound he needed to record, Ted tried many different woods finally selecting a northern maple that he painted black. Ted made and sold over 20,000 of these bones that were packaged with an instruction booklet. These can occasionally be found for sale on Ebay.

.
3. Ted Goon’s Scrapbook.pdf (NOTE: This is a very large download.)
Ted Goon’s son, Robert, loaned us his father’s scrapbook, titled Goon-Bones Braggin’ Book, which contains many items of interest about his recording career. Other letters and items that Ted sent to the Rhythm Bones Society before his death are included at the end.

4. Ted Goon Anthology of Recordings.
There are 35 known songs and 34 are included in this summary. Quotations are from Ted Goon’s scrapbook and from the telephone interview with him that is mentioned below.

5. List of Mr Goon-Bones Recordings with Label Photographs.pdf
This is a list of all known recordings made by Mr. Goon-Bones. Included are date of issue, title, (speed) record number, and a few comments. This is followed by photographs of the labels on both sides of all records that could be located. While much research was done to generate this list, there is no way to know if it is complete.

6. Ted Goon Telephone Interview Transcript.pdf
Transcript of a telephone interview with Ted Goon recorded in 2000. It includes handwritten corrections that Ted made after seeing the original transcript.

10. Steve Allen Show
This is a recording of one of the Goon-Bones Trio’s appearances on the Steve Allen Show. Steve Allen had asked Ted to him a favor – perform on his show in two days. Ted said, “I was about two thirds of the way through our arrangements, but I took a chance and we took the date with Barney Lance and Harold Fisher and performed Tiger Rag on his show. I was making Tiger Rag knowing that I was getting out of the recording business. I had hoped to make a record that would be so complex, so furious that it would give all of the other bones players a challenge to match that. So I worked hard and I rehearsed hard and we didn’t have it quite ready yet, but I took a chance and put that on the Steve Allen show. The applause that number got broke the NBC decibel machine record.”

11. Three songs from a recording Ted made of one of his performances at a high school. These plus the one in the previous paragraph are the only non-copyrighted recordings of his rhythm bone playing. Click on the links below to listen to them. From time to time, some of his records are for sale on Ebay.

Copyright 2009 by the Rhythm Bones Society