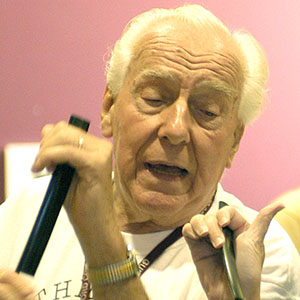 This article is a tribute to Joe Birl who was awarded the Meritorious Service Award at Bones Fest VIII for his contributions to bones playing. Joe is a founding member of the Rhythm Bones Society and a special friend who let us use his Rhythm Bones trade-mark in our Society’s name. It is an honor to write this article about him.

Joe was born in Philadelphia on August 20, 1916. He went to school until the eighth grade and was set to go to high school when a job opened up. This was in 1931 in the midst of the depression so Joe took the job; his $7 a week went to his family. Later he went to night school to get his high school diploma, studying blueprint reading. At age 18 he started working in his father’s machine shop learning how to work with different materials. He later worked for Proctor Electric who made irons and toasters. He wound up in the Allocation Department learning to work with distributors. All of these skills helped him earn a living and also prepared him to patent his now famous black plastic Rhythm Bones.  Joe has influenced an untold number of people having sold over 200,000 sets.  Joe has the only patent issued for rhythm bones.

Joe was playing rhythm bones by the time he was ten. He said, “I taught myself—I just picked it up.” Joe is left handed and played one handed. He had a neighbor by the name of Mr. Wrigley who was an older gentleman who said, “Joe, why don’t you play with both hands.” Joe says, “That was the only rhythm bones advice I ever got from anyone.”

Joe passed away on Christmas Eve, 2012. Not only will Joe’s legacy live on through all the rhythm bones players lives he touched, his legacy will continue to live on through his son, Joe Birl, Jr., who now produces his father’s “Rhythm Bones” that are available on  Amazon or eBay