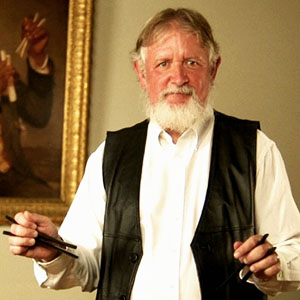 I grew up playing drums and piano, but the drums really stuck. My brother began teaching me at 7, but it wasn’t until high school when I started playing in a rock and roll band that I became obsessed. I played rock, Jazz, and blues, and took a private course at the Berklee School of Music.

In the 70’s I began to listen to fiddle music, and started lessons on the violin. Then I discovered rhythm bones and everything changed. I was taught to play rhythm bones by Percy Danforth, one of the last exponents of the Minstrel Show style of rhythm bone playing, 43 years ago. Since that time I have been privileged to know some of the great rhythm bones players of the 20th Century Including Ted Goon, Russ Myers, John Burrill, and many others.

I have been the Executive Director of the Rhythm Bones Society for the last 17 years, A non-profit organization dedicated to the continuation of the art of Playing the traditional rhythm bones. In 2003 I won the All Ireland Bone Playing Championship and repeated as champion in 2004. In 2016 I was invited to judge the contest, the only American to have done so.  I have taught rhythm bone playing at festivals and workshops across the US and in Ireland. In addition I have lectured about rhythm bone playing and the history of it at the Museum of Fine Arts in Boston.

In the early 80’s I began making rhythm bones out of the shin bone of the cow. I was advised early on in the process by Merchant marine sailor, Milton Shapanka, and gradually refined the process. I’ve consulted with Nicholas Driver, a 4th generation rhythm bone maker from Suffolk England. Rhythm bones that I make are played by Dom Flemons, formally of the Carolina Chocolate Drops, and a number of traditional Irish musicians including Mel Mercier, Tommy Hayes, Cathy Jordan and Junior Davey. I also make rhythm bones out of wood.

Letter to the Editor – 2001. I was standing in front of my bones booth a the New England Folk Festival having just given a workshop for 50 or so people, ably assisted by Norm Conrad, Tim Rielly, and Rob Rudin, trying to sift through the folks with questions, when I was approached by a young looking guy with a beard and pony tail. I was mid conversation with Jan Cornish discussing John Burrill’s meeting with Percy Danforth at that festival in 1985. He pointed to his name tag which read, “Jonathan Danforth” and I laughed, “Not related to Percy I’m sure” I remarked. “He was my Grandfather” he said. “Wow!” After regaining my composure, we settled into long reminiscences of Percy. It was a real treat! He is living in Fall River, Ma. and does play the bones a bit, but it is not his main  instrument. He intends to attend Bones Fest V! We never know what (or who) is just around the corner! Steve Brown.

Improvisation at the Museum of Fine Arts

With Raymond Henry in Tubbercurry