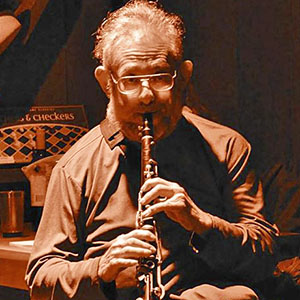 Lark in the Morning

I first became aware of rhythm bones in 1971 when I was living in London and getting by by busking on the street with my bagpipes and banjo. I would play in Portobello Road, and I saw someone playing rhythm bones and became fascinated. I looked around the market and found some old bones sets for sale, one made of ebony and the other of whale bone. I started selling bones that I had made in Asia in the late 70s and was able to find a source of bone rhythm bones.

We were already selling and playing bones before meeting Percy Danforth, and meeting Percy was like meeting a superstar. We flew Percy out to California a number of times to be the rhythm bones instructor at Lark Camp. It was as amazing to Percy to be exposed to music that he had never heard of at Lark Camp and for people at camp to be exposed to him and learn bones from him and enjoy his stories and good companionship.

He would jam with the people playing Middle Eastern, Balkan and French musics with rhythms that he couldn’t have imagined before and was inspired learning to play in 7s, 9s, 11s, 18s and more. It was wonderful to see him go from session to session with a sense of amazement and dive right in.
We were having a music party at our house, and my friend Rod Cameron brought along his new video camera. We videoed Arrigo D’Albert playing the Hurdy Gurdy. When we showed the footage to Arrigo he exclaimed, “That, that can’t be me. I am doing what I tell my students not to do!”

I realized immediately what a great learning tool videos could be. I went out and bought some video equipment.