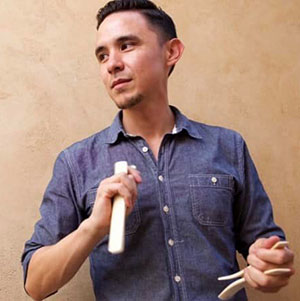 I am a lifelong student of the percussive arts. I was born in the greater Los Angeles area, and my first paying gigs ever were when I was 12 years old playing Japanese percussion and taiko for the Obon Festivals in the summer in Little Tokyo. [Photograph on Page 8.]

My foray into rhythm bones began in 2004 after being introduced to them by my teacher at the time, percussionist Brad Dutz. I was instantly hooked and have since earned a reputation for utilizing rhythm bones in a wide array of musical situations. My rhythm bones playing can be found on many albums that range from more traditional Irish and folk music to progressive modern jazz and electronic music.

In 2016, I served as the bodhrán and rhythm bones soloist and percussionist for the Broadway musical, “Come From Away” during its run at Ford’s Theater in Washington, DC. In 2019, I competed in the All-Ireland Bones Competition in Abbeyfeale, Ireland and was awarded 2nd place. I have also been a guest artist at the annual Fairbanks Summer Arts Festival in Fairbanks, AK since 2013 where I perform and teach classes in Irish percussion.

One of my favorite sets of rhythm bones are a pair of wooden rhythm bones made by Barry Patton in one hand and a pair of Pea Patch Tri-Tone rhythm bones in the other hand. Another set of real rhythm bones I play often were custom made by Steve Brown.

Also, I wanted to share this new video I made. The Facebook version was widely circulated, but I have it here on Youtube as well. The All-Ireland bones competition was cancelled in 2020, so I put together this video of all four of the US competitors who competed virtually in Ireland (see below).