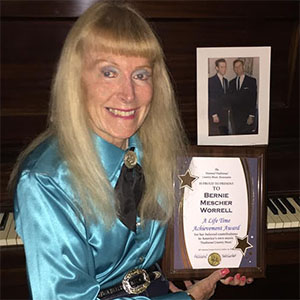 With the late Jerry Mescher, my brother, we were The Mescher Bones. Together we continued the tradition started by my father Albert Mescher when he taught himself to play the bones after hearing them at the Carroll County, Iowa fair in 1918. Because he was self taught he created a unique style I continue today.

I learned to play the bones in 1970 when my husband, Tom, and I were stationed at Keesler AFB in Biloxi, MS. I felt my father telling me to pick up the bones and I was able to play, when in all the years I had been trying, I hadn’t been able to get a roll.  Jerry encouraged me to come to the Old Time Country Music Festival in Avoca, IA, where I won the Bones competition. Together we played at a lot of festivals and other venues.  In the last few years, I’ve played at dances that are held each month at the Polish American Club here in Miami. From the performances at the Polish American Club, I’ve been asked to play at other dances and events; it’s been a lot of fun and kept me in shape for the festivals and other performances with Jerry.

In July of 2015, Bernie received a call from Bob Everhart telling her that she would be presented a Life Time Achievement Award at the 40th National Traditional Country Music Association (NTCMA) Festival in Le Mars, IA. When Bob presented the award he said: “It is our sincerest desire, Bernie, that you carry on this incredible family tradition that is as amazing as it is.” As she received the award, Bernie said: “I accept this award in memory of my Father who created this Bones playing tradition and my brother who did so much to enhance and continue it. I am thankful for this award and the gift of the bones I have been given”.