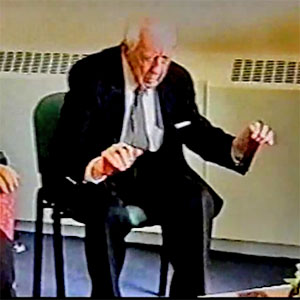 Cliff has one and a half sets of bones. The half set, which he inherited from his Grandfather, has quite a history. In 1919 Cliff was still serving in the army, although his sight was even then severely affected by the gas attack at Arras the year before. He had refused to apply for a discharge on medical grounds, because he knew that would mean he would never get a job back in civilian life.

In June 1919 he was stationed in Oberkastel on the Rhine. The Peace Treaty was finally signed that month, and his battalion was ordered to Bonn, about a day and a half’s march up the Rhine. It was a boiling hot day, and as the battalion made its way, the soldiers began to flag from the heat and lose the step. Cliff stuck his hand into his pocket and came up with his ebony bones. Click clickety click he went, and the battalion duly picked up the step.

The Colonel was up in front of the column on his horse, and he rode back down the column to find out what this clickety click was which had suddenly got his tired troops marching like good ‘uns. Looking down from his horse he saw Cliff marching along with his rifle slung over his shoulder and his bones clicking away in his hands. It would be nice to record that the Colonel rewarded Cliff with a smile or a word of encouragement, but this was the British Army, First World War. The Colonel wheeled his horse round and cantered back to the head of the column without as much as a backward glance.

That night as the company bivouacked in a deserted and ruinous old hotel, the order was given to ‘Break out the rum.’ Ironically, Cliff didn’t get any. Because his sight wasn’t too good he had been given the post of Permanent Orderly Corporal.

Performance at 102 years of age