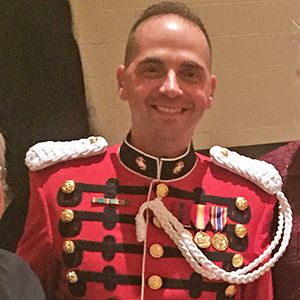 I grew up just a few blocks from the Detroit border-line in Oak Park, Michigan. In 4th grade I wanted to play the trumpet, but my mom thought I would drop out of band after a year just like my older brother and sister. To save money she pretended that I was gonna need braces so, instead of trumpet, I could either choose drums or violin (knowing I’d choose the former). At the time, my parents were pretty relieved that it only cost them a pair of drumsticks and a drum pad, but little did they know how that one pair of Bunken 2B sticks would change my life.

The next few years I was taking private drumset lessons until 7th grade when that all changed. My new teacher was Sam Tundo from the Detroit Symphony Orchestra. He co-owned a store nearby called “Percussion World” with Norm Ficket (DSO). Sam got me back on the drum pad doing a lot of heavy rudimental-style playing, but once he introduced me to the marimba I was like a duck to water and couldn’t stop practicing. Which reminds me, my mom likes to joke about whenever I got in trouble she couldn’t just send me to my room because that’s where all my instruments were!

Anyway, that same year I played a xylophone solo at the 1979 Michigan Percussion Festival in Ann Arbor for the first time in public for Charlie Owen during his masterclass. Charlie later became my role model. He was the timpanist and marimba soloist with “The President’s Own” Marine Band during the 30s-50s, then became Principal of the Philadelphia Orchestra, and THEN taught at the University of Michigan.

After Charlie’s masterclass I decided to stay for the next one, which just happened to be led by Percy Danforth! I can’t begin to tell you how amazing it was to see and hear the bones for the first time and be taught by Percy himself. After his workshop I begged my mom to buy me a pair of Joe Birl Rhythm Bones directly from Percy.

I’m currently on the RBS board and joined the Rhythm Bones Society in 2004. I also have been teaching the advanced Bones Fest workshops since that time. I first learned to play rhythm bones from Percy Danforth at the 1979 Michigan Percussion Festival. I’ve also been a percussionist and resident rhythm bones player with “The President’s Own” United States Marine Band since 1997, and have enjoyed many performance opportunities on rhythm bones throughout the United States, as well as at the White House with the Marine Band’s Celtic Ensemble. “Prior to joining the Marine Band I was the percussionist with the Rhode Island Philharmonic, and attended Oberlin Conservatory (B.M.) and Univ. of Michigan School of Music (M.M.)”