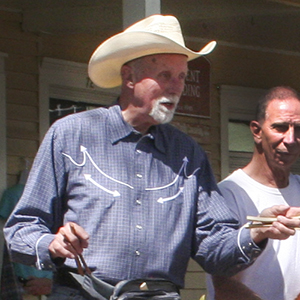 In the special edition of “Reflections on Ten Years of Bones Fests”, (Volume 8, 2006, page 3), Ev Cowett wrote, “At Bones Fest II…Steve Wixson entered the picture and nothing has been the same since. Within six months he generated 100’s of e-mails and Internet searches all related to bones and bones playing. What a find. What enthusiasm. A newsletter was in progress before we had a society…” No truer words have been written! The “picture” has never been the same.

Steve and Janet Wixson hosted two festivals: Bones Fest IV, where began the tradition of “making it a full weekend event”, and Bones Fest IX. Steve is the Secretary/Treasurer of the Rhythm Bones Society. He works tirelessly on the newsletter, introducing us to numerous subjects: bones players from the past and present, different types of bones from around the world, and the history of bones.

When Steve sends out emails to the Board members asking for newsletter ideas, I can only speak for myself, but that is anxiety-time! The conversation in my head is on the order of, “What can I contribute? I don’t know anything!” Then, I go silent from embarrassment. During Bones Fest XVIII in Grand Rapids, the Board met to discuss old and new business. Someone complimented Steve on all the work he does for our society, and maybe he could slow down. Steve’s response was, “I can’t sit and twiddle my thumbs!” In the blink of an eye, and in unison, the Board members said, “Please, sit and twiddle your thumbs!”

Words do not do justice to convey the breadth and depth of Steve’s incomparable influence. Sharon Mescher

The photograph above shows me playing my digital bones. There is a drum sensor and a custom keypad with five buttons attached to the stationery bone in each hand, and all that is attached to a drum synthesizer with the grey ribbon cables.  The synthesizer has 10 inputs and each one produces a different sound of a drum, cymbal, etc in response to hitting the drum sensor with the movable bone.. If you press no button, no sound is generated. If you press one or more of the buttons sounds for that or those buttons/inputs are generated.  Using two hands, a variety of drum kit sounds can be produced.  For it to be practical, the connection to the drum synthesizer needs to not use cables, but for this prototype, cables work just fine.  Kind of amazing the sounds it can generate.

Here is a photograph of the plastic rhythm bones printed on a 3D printer. 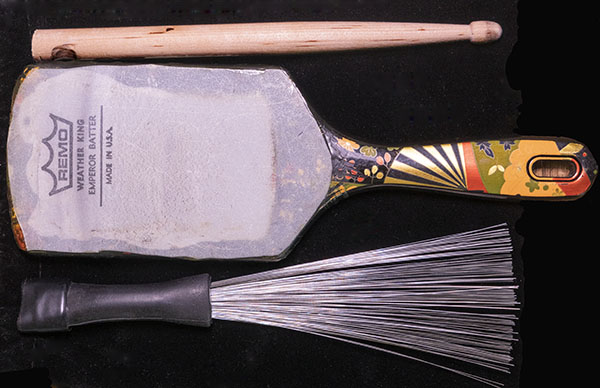 This is an image of one of two kinds of drum-like rhythm bones, this one made from an hairbrush with the bristles replaced with a drum skin (the other is a tambourine with the jingles removed and a slot cutout so it can held as a stationary rhythm bone).  Both can be played with a rhythm bone or my favorites are a cutoff drum stick with a Joe Birl like groove or a cutoff drum brush.