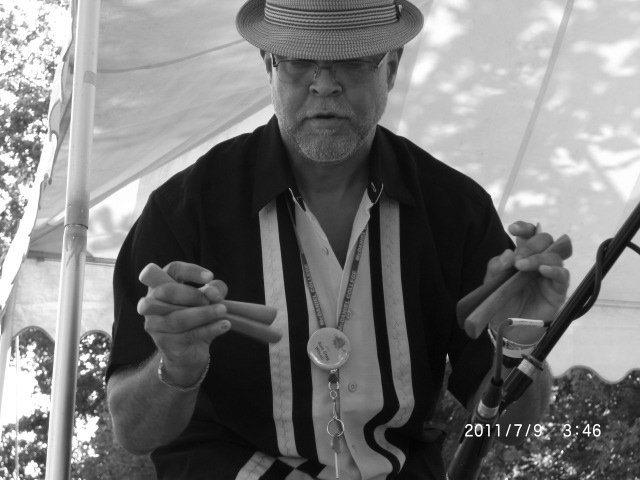 Born and raised in Washington, DC, I learned to play rhythm bones from my dad, who learned as a kid, growing up in Philadelphia in the 1920s and ‘30s. Every once in a while, he’d grab a couple of spoons off the dinner table and whale away, sharing stories of turning leather-soled street shoes into tap shoes by hammering bottle caps into the soles.

As a little—and I mean, little—kid I had a set of oatmeal boxes I stored in the kitchen cabinet, and used as hand/finger drums.  When I got to Junior High School I joined an after-school a folkloric ensemble, playing African and Latin percussion, dancing, and story. That summer, we toured D.C., performing in local parks on porta-stages. It was great!

I’ve been percussing ever since – playing with Babatunde Olatunji in New York public schools (1976) to these albums: the obscure classic, “New Age/Funk”, “Dance Free” by Cloud Dance (1982), “Minstrel Banjo Style” (1994), and the Carolina Chocolate Drops’ award-winning, “Genuine Negro Jig” (2010), and beyond. I’ve taught workshops from Northern Ireland to Hermosillo, Mexico, and all over the states: Alaska to Florida; Putney, VT to San Diego, CA. My book, The Drummer’s Path: Moving the Spirit with Ritual and Traditional Drumming, and companion recording, The Drummer’s Path: African and Diaspora Percussive Music, came out in 1992.

In 1980 I bought my first banjo. This led to my co-directing the historic Black Banjo Gathering of 2005, from which grew Sankofa Strings/Sankofa string band (with guest artist, John Sebastian) and the aforementioned Carolina Chocolate Drops.

I’ve played bones for the Carolina Chocolate Drops string band; on my own World Music/Old Time CDs, at weekly ceilidhs @ Madden’s in Antrim, Northern Ireland; with Ronstadt Generations; behind blues and swing performers East to West; and with the Repeat Offenders R&B band since 1998.  I’ve also played ‘em in Latin ensembles, and more.  My prized bones are two sets of Cliff Ervin teak bones, each pair crafted from the same piece of wood, and notched like the ones in the Sidney Mount painting.

Here’s a glimpse of me tapping’ the bones, among other things: https://www.youtube.com/watch?v=yaE0JDba-ok