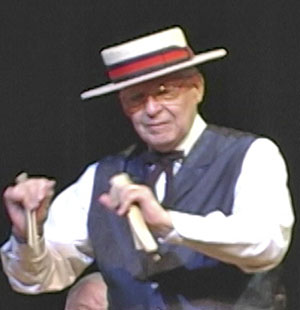 I first got to know Walt Watkins at Steve Wixson’s Bones Fest. I was new and kind of disconnected. Walt had started the pass-offs and I was just standing on the side-lines. Walt made me join in and that is when I first felt at home in the Rhythm Bones Society. We always played together some at Fests and even sent each other CDs we liked so we could practice to play together at Bones Fests. I loved the guy; he would do anything for you. Walt was a Colonel in the Army, a take charge kind of guy and a great friend.

Some of you bones-rattlers will remember the many pass-off led by Walt. It was important to Walt that the traditional way of playing rhythm bones is kept alive. Like Walt, some of us old geezers grew up on Dixie-land type music. The Fire House Five Plus Two CD that we all played at Bill Vits’ Grand Rapids Bones Fest was from a pass-off recording from Walt. We first played it at Black Bart’s (Dave Boyle) Bones Fest in Wisconsin. Walt loved rag-time, jazz, polkas, and blue grass, or ‘anything with a good beat and rhythm.’

Besides his joyful bride Joy and his family, I don’t think Walt loved anything more than playing the rhythm bones. After his first stroke, I talked to him and he said, “Well, I can still play with one hand like an Irishman.” Ernie Duffy will bring Walt’s recording to Bones Fest XIX at Skeff Flynn’s place in West Virginia. I put this in because Walt would like promoting our next Bones Fest.

Walt played bones for seventy eight years. He said, “I learned to play from my father and I learned to play two-handed from Don DeCamp and Jeff Newman.” He played Six Flags over Texas, the Texas Heritage Festival, Silver Dollar City, MO.  In 2001, at Avoca, Iowa, Walt entered the “Old Time Country Music Contest for Bones & Spoons,” and won second place.