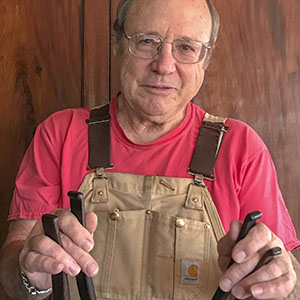 I was born 1944 in Charleston, SC, grew up in a suburb of Philadelphia. I went to Denison University in Ohio with a stint as a game warden in Alaska. In between, I was in the Navy. I have lived in Hawaii, California, Montana, Alaska (again), and now Maine since 1976.

My father had started playing minstrel style ebony bones as a young man. Unfortunately I don’t remember “his story with the instrument” (which is why Steve Wixson’s tireless work documenting “us” is so valuable to all of us now).

Dad loved big band music, having played clarinet in his younger years. My two brothers and I started doing a regular family jam with Dad when I was 10 or so.

At some point in the 1950’s Dad came home from work with a few sets of Joe Birl’s bones. And these were added to our mix. So Joe Birl’s name became fondly fixed in my brain as did the shape of his bones. And I have riffed on that shape since with some of the bones I continue to make.

I/we never encountered another bones player until some time late in the 1980’s. And since those early years I have continued to play almost daily now. And entirely within my family (except for Bones Fest!) which now includes nieces and nephews who also play. My nephew Carter Waite came to Bone Fest XVII, 2013 in Leominster, MA where he bought a set of Adam Klein’s gorgeous wooden bones. Carter carries them with him to this day and plays. I was astounded to watch him play a triplet in under a 1/2 hour the first time he picked up a set of rhythm bones!

Letter to the Editor – 2002.  ast night there was a program of Spanish & Latin American music on WERU, our local community radio station. It made for great jammin’ with my rosewood bones. I tend to use my aluminum bones on Reggae & Blues. On Thursday nights, following a Jazz show I do with a friend on WERU there is a great Bluegrass show called  Bronzewound.” And sometimes there is live entertainment. Anyway it always is a great time to jam which I do at the station and on the way home. The General Manager of the station, Matt Murphy of Irish descent, became interested in the bones so I made him a set of  luminum ones which he has been practicing on. One co-host of “Bronzewound” is also into the bones. So at times the radio station is ablaze with all of us rattling away in  the studio as the “real music” goes out over the airwaves. Parker Waite