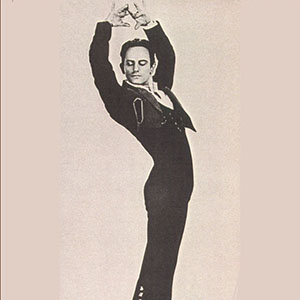 Matteo honored the Rhythm Bones Society by attending and performing at Bones Fests III and IV. Matteo was a world class dancer and castanet player and founder of the Foundation for Ethnic Dance whose purpose is to document, preserve, teach and perform authentic forms of indigenous dance representing many countries of the world.

Matteo wrote a small, marvelous book on the castanets titled Woods That Dance (published as Dance Perspectives 33, Spring 1968). In it he tells the story of castanets beginning with a history of dance and the idiophone (defined as an instrument of naturally sonorous material that produces the desired sound when two or more pieces of it are struck together). Scholars have postulated that dance is the oldest of the arts with dance being inseparable from rhythmic accompaniment.

Rhythm bones players share the history of the idiophone, and Matteo includes a brief section on rhythm bones as a type of castanet. Bones must certainly predate castanets, but no one can dispute that castanets are the more refined, previsioned and sophisticated.

Castanets range in size from a few centimeters to the size of a man’s large hand, and generally are made from granadillo wood. Castanets are made to fit the individual with the best castanets being the ones that are best for you. As with bones, castanet tones mellow and grow with age.

The two pieces of the castanets are held together by a cord and suspended from the thumb. The sound is produced by striking the tips of the fingers against one piece causing it to strike the other