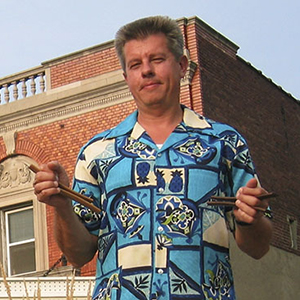 Born in the Chicago area in 1957 (which Bill Vits now realizes coincided with the birth of rocknroll and the plastic drumhead), his Dad was transferred to Nashville, TN as a salesman for Mirro Aluminum Company. His earliest memories recall being sent home from religious preschool for calling another child a liar. The next day he returned and successfully called the child a prevaricator.

At 6, Bill started piano lessons with a very hip lady, June Wolfe, who could read a book while playing background jazz in the strip clubs of Printers Alley. One day he heard her son playing drums in his bedroom and he asked if he could have drum lessons. Bill promised he would practice more than watching TV, which was easy when you only had 3 channels. Jim Wolfe was the funkiest white kid who played with all the area soul bands. The first record he gave Bill was “Green Onions” by Booker T. and the MG’s. He would stack 45’s on Bill’s record player and play along with Otis Redding, Wilson Pickett, Beatles, Stones and Bill’s favorite, James Brown.

Jim got Bill involved with Vanderbilt’s Blair Academy of Music where he started lessons with Farrell Morris, who was a Nashville studio and orchestral percussionist. This led to Bill becoming the youngest member (11 years old) of the Nashville youth symphony playing along side high school players.

Once again, Bill’s Dad was transferred and they moved to Indianapolis. His mom found the Paul-Mueller Percussion studio and Bill became a student of Erwin Mueller. The drum set took a back seat for a while as Bill worked on his marimba and timpani playing. Jazz band and marching band led to him becoming drum major. His summers were filled with music camps at Ball State University.