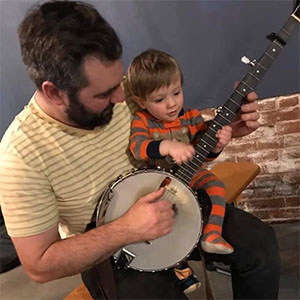 Spencer’s musical beginnings were focused on traditional and world percussion where, in addition to musical theater, he played jazz, blues, and rock. In 2005 he became more interested in stringed instruments. Thanks to the good folks at the Blackstone River Theatre in Cumberland Rhode Island, Spencer discovered a love for Celtic and Oldtime in 2010. In 2015 he co-founded a Providence, Rhode Island Oldtime slow jam, an introductory, casual learning meetup for Oldtime and Celtic-session style jamming. After crafting too many of his own rhythm bones, he was properly introduced to the legendary Steve Brown in 2016.

Spencer is also a machinist, jewelry maker, and hash house harrier. He is a pogonophile who enjoys zymurgy and loves being a dad of two very energetic kiddos. His kid’s first instruments are absolutely homemade rhythm bones.