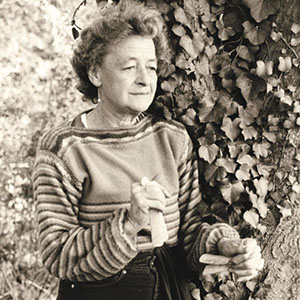 If you do a Google search on ‘Sally Tompkinson,’ you will see links to a couple of photographs of her and a link to an interview by folklorist John Merideth. The photographs and interview are housed in the National Library of Australia, and I wanted to learn more about a rhythm bones player who could catch the attention of such an institution. Searching more with Google and following up with e-mail, I contacted the Library, her son Glen, and friends, Bob Campbell and Barry Norris.

Bones Player Sally Tompkinson was born premature at 2 pounds. One day, when she was about 16 years old, she heard an Aboriginal lad playing rhythm bones. Intrigued, she hung around him until he showed her how to hold and rattle them. She was so adept that he taught her some of the finer points, such as playing a roll, then presented her with his set of bones.

Sally’s dad was a drover, as well as being a blacksmith and a wheelwright. He taught her to waltz when she was a little girl by letting her stand on his feet as he waltzed around the room. When she had learnt the movements, she would step down and dance by herself.

Sally played bones taken from the sun-bleached skeleton of a beast found in a paddock. With the marrow eaten out by insects, these bones had a softer and richer tone than the ‘green’ bones obtained from a butcher, which were then boiled and scraped. Sally would tune her rhythm bones by shortening them until she got the sound she wanted. She was very particular about which bones she played, and had bones with high, medium and low pitch. Her son said Sally had some wood rhythm bones, but she said real rhythm bones were superior.