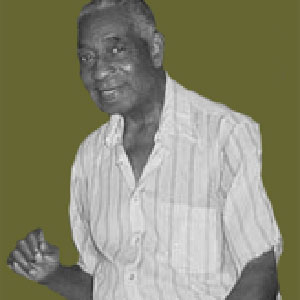 Richard ‘Mr. Bones’ Thomas was not talkative. He had a great sense of rhythm. When asked to play, he just shook his head OK. He played short beef ribs. He aged them and polished them. They had a soft mellow tone.

Richard planned to come to Bones Fest III, but a knee problem kept him away.  He would have been a Founding Member had he attended.

He knew how to improvise – probably the best at that I have ever heard. My understanding of improvisation is playing a rhythm outside of the rhythm of the tune but in consonance with the beat. Sometimes the music could be stopped with him just playing on and when it started again he would hit the beat perfectly.

He always played seated and could play even when one sang without stepping on their being featured. In other words he could play along just like any band member. Bones players do not do that very well. But he did.

The barbershop is the place in NE Washington, DC where the players meet every Saturday at 1 pm and play until they get tired. It is at 2007 Bunker Hill Road. Their phone is 202- 526-7539. Put a contribution in the can for the Archie Edwards Heritage Foundation and you are welcome. Don’t go in big groups; they can hack bones players just one at a time. Call before you come.

Most of the music is bluesy. No blue grass played here. Lots of whinny harmonicas around and lead guitars but enough bones rhythm to turn you on. I told Thomas I liked his play; he smiled and shook his head up and down which I believe meant he liked my play too. He was great and an asset to the craft.  Worthy of emulation, he is sorely missed. Walt Watkins