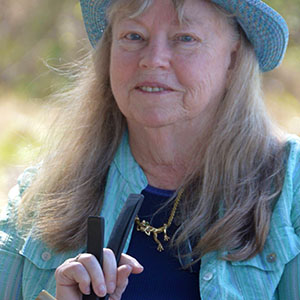 Thanks
Rattling Review of Bones Fests

I’m Mary Lee Sweet and I am a Bones Player! I never even heard of rhythm bones until I was in my mid-50s. Then my husband Frank and I began to combine storytelling, Civil War reenacting and music performances in our spare time. He was playing the guitar, but switched to banjo, which was better suited to our 19th century venues. I needed some kind of instrument, but strings didn’t agree with me. With that in mind, I went to the Red Dragon Music Sutler’s tent at the Civil War Olustee Battle Reenactment in Florida. There were drums, bugles and some wooden sticks about 7 inches long. I asked what they were, and the owner said they were “bones.” He gave a brief demonstration. Looked good to me. How hard could it be?

For a year or so, I worked at trying to make some kind of rhythm with those sticks. I could keep a steady beat, but nothing more. They frequently flew out of my hands and across the room. I was a struggling, one-handed rhythm bones player when by chance I found the Rhythm Bones Society website. There was to be a “Bones Fest” in Greensboro, North Carolina. I made arrangements, and in July Frank and I were in a hotel practicing our music when there was a knock on the door. I opened the door and a man I did not know said, “I hear a rhythm bones player in this room.” It was Don DeCamp, and he had called me a “bones player!”

I was born in North Carolina, but grew up in Virginia. My daddy was a cotton mill man. He liked wrestling and country music. During the music season, we would go to Richmond every Saturday night to see the Old Dominion Barn Dance show with Sunshine Sue. Some of the people there were Chet Atkins, Earl Scruggs and the Carter Sisters.

[NOTE: Mary Lee was awarded the Rhythm Bones Society Meritorious Service Award in recognition of her years of videoing Bones Fests for the benefit of attendees.]