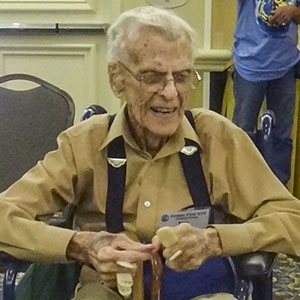 Jim Steakly from Sanford, Florida, at 99 years old, decided to learn to play rhythm bones. His daughter, Jimi, saw an ad for Bones Fest XVI on Lark in the Morning’s website. She came from Alabama to take her father there. Steve Brown suggested that since mornings  were workshops, she might prefer to come in the afternoons when jamming and performances would be the order of the day.  She said no, that her father specifically wanted to attend the workshops so he could learn to play better.

Jim explained that he had played guitar and other instruments, but with age, the ability to play those instruments was “fading away.” He remembered that in 1948 in West Virginia he had seen a coal mining man playing rhythm bones to the music of a jukebox in the restaurant.  The man played with three bones in each hand. “I went to the restaurant just to hear him play rhythm bones; I came today to learn more. Don’t know if I will learn, but I will have the opportunity. I tried to straighten my rhythm bones, but they don’t straighten!” Jim played his rhythm bones and Steve Brown got the audience to clap a rhythm. Then Steve played a waltz on the penny whistle while Jim rattled his bones. Jim Steakley’s opportunity to learn more about playing rhythm bones will surely be one of the “precious memories” that BFXVI attendees will treasure.