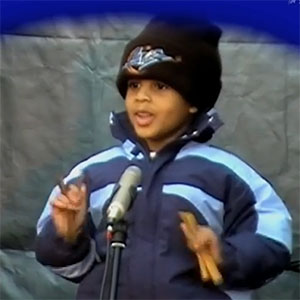 Most children start as drummers. Nicholas Spicer was no exception. He started keeping time as an infant beating on the walls of his home. Nick got a pair of bongos for his first birthday.

Nick first played Bones after a Carolina Chocolate Drops concert at the age of 4. Dom Flemmons gave him his first lesson backstage that day. Soon afterwards Jim Lande made Nick a set of bones that were perfect for his hands. In no time he was clicking and clacking around the house. Mike Baytop regularly played at a farmer’s market nearby and encouraged Nick to sit in with him whenever the opportunity arose. Mike says he got more tips whenever Nick was out there with him. That year Nick played with the Archie Edwards Blues Heritage Foundation at the DC Blues Society’s DC Blues Festival.

It was a cold day that December at the Riverdale Park Holiday Market. Nick was wearing his father’s wool hat pulled way down on his head. Nick and I were watching Mike Baytop perform his set and Mike invited Nick to sit in like other times. You see how he listens closely to Mike. Listening is an important tool. Nick has always been careful to make sure what he plays is a contributing part of the music. What’s fun to watch in the video is the joy and happiness both generations have in making music together.
Over the years Nick has performed with the Archie Edwards Blues Heritage Foundation when they would play at events in the community. He has also sat in with his father’s band, MSG Acoustic Blues Trio, and performed with his father at the Folklore Society of Greater Washington Summer Festival.

The community at Archie’s Barbershop has always welcomed and encouraged young players. Nicholas has been a part of that community since he was an infant.

Nick is now 11 and plays saxophone in the school band. Miles Spicer
[Check out the video of Mike Baytop and Nick Spicer on rhythm bones at http://www.youtube.com/watch?v=OdLRWbCeZi8. Jim Lande says Nick recently discovered a cahon drum and could play it instantly. Says he’s retired from bones.]