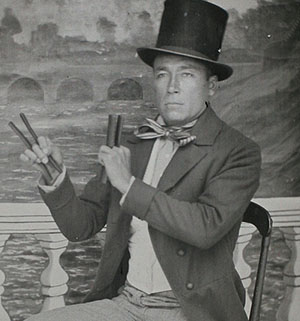 As a mid-19th century living historian with an interest in the Mexican War, California Gold Rush and American Civil War Ed, in 1999, started listening to the recorded music of bands such as the Amoskeag Players, 2nd South Carolina String Band and Bob Flesher aka Dr. Horsehair.

He became enthralled with the sound of the bones and the banjo. The only music Ed plays is American Antebellum Pop music which is the music of the minstrel stage. He is in a band The Free and Accepted Minstrels of Old New Orleans. He plays the bones, banjo, jawbone, tambo and triangle.