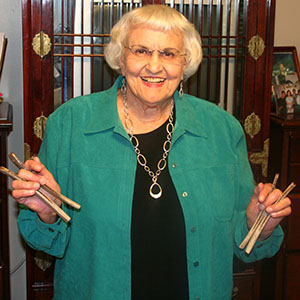 Mary Batchelor Seel, is glued or screwed together because her bones did not come with connective tissue; thus she has had four back fusions, both knees replaced and both shoulders completely replaced—one in January 2007; so no wonder at almost 83, she says her bones rattle, but it does not keep her from “playing the bones”.

This fascination with bones began when she was in the fourth grade and heard a fellow from Rock Hill, S.C. named Jimmy White playing the bones. She went home and carved two pairs out of flooring. From that time on, Jimmy and she would have jam sessions every summer in Montreat, N.C. He could imitate a train in a way that she never quite mastered.

They swapped ideas until she left the US for South Korea to serve 37 years as a medical missionary with her beloved violinist surgeon husband. They called him the “sublime” and she was the “ridiculous.”

Her Dad was from the Ramsay Clan from Bo’ness, Scotland, and the first of his family to be born in the United States; thus he encouraged her to dance the fling and compete with the bones. Her mother was a direct descendent of Daniel Boone. She was required to memorize several pieces on the piano, after which they let her study drums using instruction from Haskell Harr. Gene Kruppa was one of her favorites in the Big Band era having heard him in person. Percussion study led her to the tympani and other noise makers.

She was featured on the bones in Ravel’s, “Bolero”.