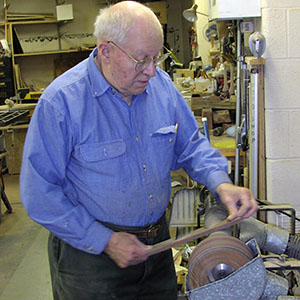 Percy Danforth is a name familiar to most people in the bones-playing community worldwide. Percy, who learned to play the bones as a young child in the early 1900’s, began teaching them to others in Ann Arbor, Michigan in the mid 1970’s and went on to play and teach the bones throughout the United States and in Great Britain up until his death in 1992.

Less well known, but perhaps equally deserving of credit for the bones rise in popularity in Percy’s wake is Ray Schairer, the man who has fashioned the bones that Percy and his many students—and the students of his students—have played.

Ray, born in 1922, is the third generation of Schairers to farm land near Ann Arbor, Michigan. He was born on his family’s 120-acre family farm and grew up running it alongside his dad and then continued by himself after his father’s passing. He planted grains, milked cattle, raised sheep and chickens — doing what used to be called general farming.

Along the way, he also became a fine woodworker. His dad taught him the basic skills as a young boy (Ray still has the first workbench his father made for him) and Ray went on to hone his skills, fixing and making furniture and fashioning everything from wooden bowls to miniature mantle clocks, lathe works and other craft articles. As a young man he began teaching woodworking to boys and eventually, as the times changed, also to girls in the local 4-H program. Recently, the Washtenaw County Extension Service honored him for 55 years of 4-H leadership.

His fame as a woodworker and teacher is probably how he came to the attention of Percy Danforth.