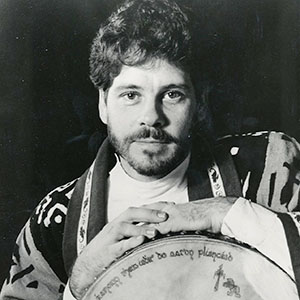 Aaron is one of a select few players who demonstrates a two-handed bones playing style and has further developed two techniques never heard before in the field of musical bone idiophone playing; the production of quadruplets/16th notes by the single pendulum action of one hand, as well, his unprecedented ability to change pitches simultaneously while playing.

Aaron has performed with the legendary Celtic virtuoso of the Irish uillean pipes, Paddy Keenan, a driving force and one of the founding members of the Bothy Band who forever changed the face of Irish Traditional music. As well, Aaron was the world tour drummer for Jazz virtuoso and inventor of the vibraphone, Lionel Hampton, whose contributions are legendary in the face of modern American music and is considered to be one of the founders in the creation, preservation and history of Jazz.

Aaron has made numerous appearances on KPFK, KCRW and toured and performed with both the Aman and Avaz International Dance Theaters. He was the featured Ghanaian percussion soloist for the National Repertory Orchestra in Colorado performing in the premiere symphony orchestra, Global Warming, the featured Irish percussionist, clinician and exhibitor at the International Percussive Arts Convention and additionally contributing educator for the NASA Native Earth System Science Curriculum Project.