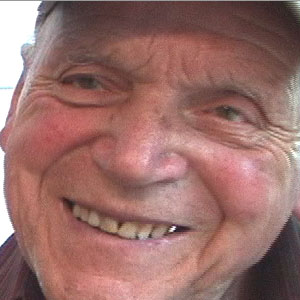 Johnny B. Perona (Giovanni Batista Perona) passed from this life in 2009.  Born to Italian immigrant parents in the copper mining and cultural melting pot of Calumet, Michigan, Johnny was exposed to many cultures and their music which he had a very keen ear for.

He gave his first musical performance at the school Christmas program at the age of 12 on the accordion. He is regarded a virtuoso on the concertina, accordion, violin, mandolin and guitar, instruments on which he played old-time dance music for Italians, French, Finns, Slovenians and Croatians at local house parties, community dances, taverns and many music festivals for over 75 years. He has been referred to as a “one man Yooper (resident of Upper Michigan) multiethnic music festival” because he plays so many instruments in such a diversity of ethnic musical styles. But it is his mastery and performance on the rhythm bones and his own original spoons playing style that is most widely appreciated.

Johnny was introduced to rhythm bones in 1948 while playing his concertina in a local tavern that an alcoholic bones and spoons player often frequented. He showed Johnny how to hold the bones, but was reluctant to teach him too much, fearing competition. “You’ll never learn I can see that right now” he told Johnny. Johnny became obsessed with rhythm bones and learned to play them impeccably and also created his own unique “chiming” spoons playing style. Beginning in 2001, Johnny was awarded three apprenticeships from the State of Michigan to teach rhythm  bones and spoons, and one of his apprentices was member Randy Seppala.