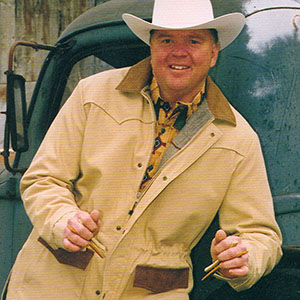 If the Rhythm Bones Society awarded an ‘Ambassador of Rhythm Bones’ title, Barry Patton would receive one. He has performed all over and as far away as China. He has performed on television and in movies. He makes and sells rhythm bones and has an instructional video. He is a regular at the Walnut Valley Festival. He plays bones faster than anyone I’ve seen.

Barry Patton was born in Winfield, Kansas in 1960 and has lived there for most of his life. He runs a diesel truck repair shop and plays bones as often as he can. I asked Barry how he learned to play the bones.

“My grandfather, Lou Berline, was an old time fiddle player. He had a guitar and bones player whose name was Cecil Hiatt [for more on Cecil, see newsletter Vol. 5, No. 3.] This was going back in the 40s, 50s and 60s when they were all young men in the farming and cattle business. Cecil would come over to our farmhouse always with his bones in his pocket or in his guitar case.

“One day they were playing some fiddle tunes and he pulled out these cow ribs. I was about five years old, just up off the floor, you know, where I could watch. They had a snappy rhythm and just kind of intrigued me. I never gave a thought about playing them.

“My grandpa and Cecil played for years and years until my grandpa passed away in 1973. At this time, I was 13 years old and Cecil had been diagnosed with cancer of the bladder.

“The Walnut Valley Festival had opened in 1971, and we all went to this bluegrass festival because it was our kind of music. Everybody loved it. “Also I had an uncle, Byron Berline.

Barry gets a lot of stage time performing with the Byron Berline Band. The band was a part of the HBO series, Deadwood.  Some of the notable accomplishments of the band are: In 2005, they traveled to China for a 10 city tour, and opened for Amy Grant in Texas. In 2006, Barry was on the NBC’s Megan Mullally Show, and had other shows scheduled.