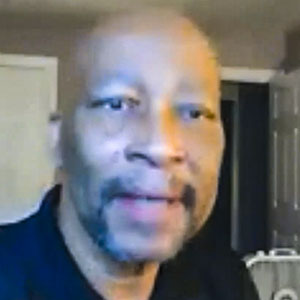 Irvin is a Houstonian, 62 years of age, and a native of Arkansas but raised in Houston. A chemical engineering professor by trade, he learned to play rhythm bones from his big brother, Jasper, who, nine years older, passed away last September.

Hank (Jasper’s nickname), taught me how to drive, and before that how to play basketball. It was while I was in college, about my freshman year, I think, that he taught me to play rhythm bones. I caught on pretty fast, he said judging from the others he taught over the years. I remember asking him where he learned to play rhythm bones and him saying it was an old man in the neighborhood when he was growing up.

My brother, who was an artist and a craftsman, made his own rhythm bone sets and gave me more than a few pairs. I learned a little of that craft, but prefer to buy mine. I especially like the feel and sound of my mixed set of aluminum and walnut rhythm bones.

Since learning to play, I guess going on about 45 years ago, I have taught a few people to play myself, including my wife Anita. My children learned but didn’t take on to it. But there are a few friends out there who learned, of course at those slow, private parties, how to roll rhythm bones, some better than others. Whenever one of my learners would show some proficiency, I would normally gift them a pair of my rhythm bones.

I am pleased to be a part of the Rhythm Bones Society. My brother and I joined, together some years ago (I don’t recall exactly when, but I bet there is a record :). We attended one Bones Fest and played together in one of the sessions, which has been a life’s highlight for both of us. Looking forward to the upcoming Fest!