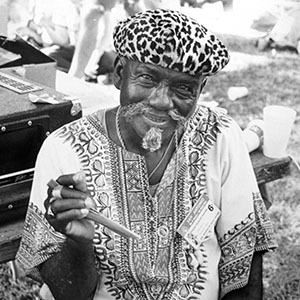 Bones Nobles was a legend in Beaumont and around the state of Texas. He played with the likes of Gatemouth Brown and Clifton Chenier. He appeared in three films, and one titled Bones is a documentary about him. He was profiled on the Real People television program by Charles Kuralt in one of his On the Road television segments. He was invited to appear on the Johnny Carson television show but did not because he did not like to fly. I suspect because he would not fly, he never gained national recognition, so that people, including rhythm bones players, who should have heard about him never did.

John Henry Nobles, Jr., was born in Opp, Alabama on April 19, 1902. His father, John Henry Nobles, was a preacher, and his mother, Pateroney Lee, was a Cherokee/Choctaw Indian. John, Jr. moved to Beaumont in 1922 and married his wife, Virgie, the same year. He was a truck driver and later owned a BBQ restaurant.

He could always be found at just about any festival or celebration. He especially loved playing for children, and put in frequent appearances at local schools.

The following is a excerpt from an interview by Alan Govenar, from his book, Texas Blues: The Rise of a Contemporary Sound (Texas A&M University Press, 2008.)

“I don’t care how much rhythm we had. We didn’t have no way to let it out. My dad was making fifty cents a day. Three dollars for six days. There wasn’t no money to buy musical instruments. The only way for us to let out our rhythm out was to find us some bones, but the fact is we didn’t use bones at first. We cut our rulers at school at the six inch mark and made us two little sticks.