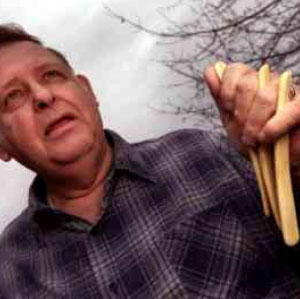 Russell Myers places a set of bones between the fingers of each hand and flips on a recording of, “I’m Looking Over a Four-leaf Clover.” For three minutes, the 67-year-old Madison County, VA, man clackety-clacks out a beat to the old song. Somehow, he even manages to change pitch on his percussion instruments.

Russ’ goal was to make sure this art did not die out in America.  “Ninety-nine percent of the people in this country don’t even know there is such a thing as bones playing,” Myers said.

Russell Bordley Myers, 72, of Brightwood, VA, died Sunday, September 10, 2006 in the University of Virginia Hospital. He was born March 27, 1934 in Baltimore, Maryland, to the late David Russell and Helen Bordley Myers. After graduating from Washington and Lee University in 1956, Russ joined the Army and became a National Guard Captain. He was a Green Beret in the 16th Special Forces Group Airborne. Russ retired as a Manufacture Representative for Goodwin-Rawls Sales in Richmond,VA. He was a member of the Possum Ridge String Band and the Rhythm Bones Society.

Russ along with Percy Danforth was recorded by the Library of Congress in their efforts to preserve folk music.  At Bones Fest I, he demonstrated how to change pitch without moving the bones in your hand.  At Bones Fest II, he gave a good summary of the history of rhythm bones.  At Bones Fest III, he and his wife hosted the event.  He attended most every Fest until his failing health prevented it.  He won the “World Champion Bones Player” title at the Old Time Traditional Country Music Festival in Avoca, Iowa.