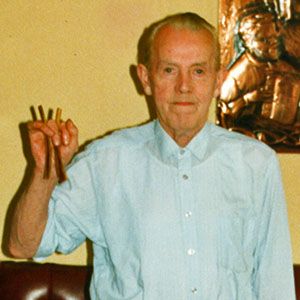 Paddy ‘Sport’ Murphy lives a mile or so outside of the town of Abbeyfeale on the Limerick/Kerry border. He is a well known musician in the area: known to many as a local character, and regarded as the senior bones player in the region.

Paddy won the inaugural All-Ireland Bones-Playing Competition in 1997 which is held as part of the Abbeyfeale annual traditional music festival. He returned two years later to win the prize for the second time, and again in 2000.

I met Paddy for the first time when I adjudicated the competition in 1997. It was difficult not to award him first prize: his performance was compelling and his musicianship obvious. That he was also the local favourite did not go unnoticed by me!

Paddy’s commanding performance was not the only remarkable thing I witnessed that day. The competition was held outdoors on the back of a truck as the sun was setting on the town square. One by one the bones-players mounted the temporary stage to perform with a single tune-player, more often than not a local box player such as Donal.

Paddy acknowledged that not all bones players were sensitive to balance when performing with other instrumentalists. “Some people don’t respect players at all. They’re off like a jet. They’re gone and they don’t care about sound or noise. They’re belting away and (that) upsets players.”

One of the first things to strike me about Paddy’s playing was his flambouyance…He likened this total involvement in the performance to a kind of madness, something that was long ago referred to as St.Vituse’s dance.

Even when playing with several other instruments the bones draw attention to themselves. The instrument, the sound, and the gestures of the bones-player attract the ears and eyes of the audience.  Mel Mercier