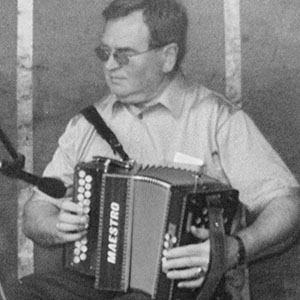 The first time I actually saw Dan was on a video tape the RBS had purchased showing the 2002 and 2000 All Ireland Bone Playing Championships. He had received a letter from Evertt Cowett applauding the Championship and Dan’s efforts to promote and continue the championship, and was reading it into a microphone from the stage at the competition. When he got to the last line of Everett’s letter, “may your bones be with you”, he stopped and said, “I’d be in real trouble with out them!”

Dan Murphy, musician, businessman, festival organizer, and all around great human being, passed away April 10, 2015. He was the force behind instituting the All Ireland Bone Playing Championship as inspired by his friend, and Master bone player Sport Murphy. For many years Dan ran the Failte Bar in Abbeyfeale, and was responsible for bringing to the town many of Ireland’s finest musicians. In 1994 he, along with his wife and a committee of very enthusiastic folks, started the “Fleadh By the Feale” in Abbeyfeale, a traditional music festival which included concerts, a busking competition for kids, set dancing, and classes in various instruments. In trying to distinguish the festival from other festivals in Ireland, the idea of sponsoring the All Ireland Bone Playing Championship came to him. The local community was wildly enthusiastic, and the competition grew each year. Many of the local bone players competed, while his  son, Donal Murphy, a noted accordion player, provided the accompaniment. The Fleadh is in it’s  21st year this year, and the Bone playing Championship has been a part of it for many years.

Dan played the accordion, and told me once he had briefly been a student of the famous Kerry Fiddler Padraig O’Keefe. He also told me once that he was the only member of his family who had not won an All Ireland Championship. He tells a very funny story of playing the accordion for a police man to get out of getting a ticket. He had ambitions, at one time, of hosting the World Bone Playing Championship, much like the World Bodhran Championship held in Milltown, County Kerry. Unfortunately he became ill before that could be realized.

Dan did a lot for traditional Irish music, and for bone playing itself. Attendance at his funeral on April 12 reached 7000. I will cherish the time I spent with Dan, and his family in Abbeyfeale. He was not only a friend of the bones, but a true friend to me. RIP Dan Murphy! Steve Brown

Ketter to the Editor – 2002. Our committee is delighted to have made contact with you and hope maybe we could compete in each other’s festivals in the future. This is our last year calling ours The All-Ireland Bone-Playing competition as we would hope to make it an International event. We would like to see our Bone Playing Competition have a broad set of rules and regulations which would cover both of our countries and perhaps Canada which I believe has pockets of  Bone players also. We would greatly appreciate any thoughts or ideas you might have regarding your bone players coming to Ireland to compete or vice versa. Perhaps  you could send us a regular copy of your ‘Rhythm Bones’ Newsletter and we will keep you informed of the happenings in Abbeyfeale. The town has a very strong traditional music, song and dance background and our festival each Bank Holiday Weekend in May attracted the cream of talent in the country. This is our  eleventh traditional festival in the town and each one seems to get bigger and better. Pat Sport Murphy’s son Jack told me he is recording this year’s festival for  you and he also has the last three or four Bone-Playing competitions recorded so we will try and send them to you and your members. Dan Murphy, Abbeyfeale, Co. Limerick, Ireland.