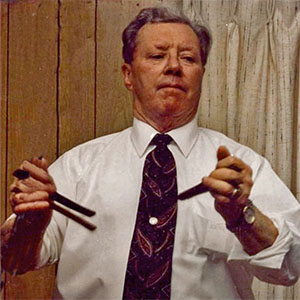 When I learned to play rhythm bones over 40 years ago, I began a search for other bones players around Boston. The two names I heard when I began my search were, John Burrill aka Mr. Bones of Boston (see Rhythm Bones Player Vol. 3, No.1) and Johnny Muise.

Initially I had a very hard time locating Johnny as no one seemed to know where he lived or how to get in touch with him. Quite by accident I took a record out of the local library, an Anthology of New England Fiddling, and on track 14, I struck gold. It was a set of jigs by Boston Fiddler Joe Cormier and it featured Johnny Muise on ‘Clappers.’
His playing had a huge effect on me, but contacting him remained elusive. Finally I had a lead, that he lived in Roslindale, a section of Boston, and looking in the phone book I got a number. I had several long phone conversations with John and even got him out to the New England Folk Festival, but never got a chance to really hear and document his bone playing story. It has taken me a number of years to finally start putting what I know of John down on paper. This article is the result of my limited experience with Johnny and an extensive interview with his daughter Rose Marie Christensen, and an extensive interview and messages with his daughter Janine Randall.

The roll of rhythm bones or ‘Clappers’ in Cape Breton music remains somewhat elusive. The fact that Johnny played so well and impacted so many of the musicians around him indicates to me that there is more there to be discovered.
Johnny’s history is intertwined with the culture and music.