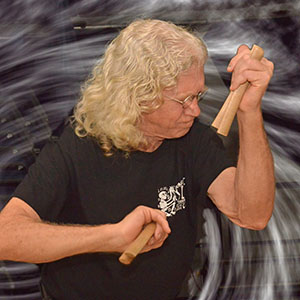 One of the most entertaining members of the Rhythm Bones Society is Darryl Muhrer. Here he described himself in a recent biography in a Bones Fest program booklet.

“My first performance was as Dr. Spike in June 1978, inspired by Percy Danforth from whom I learned to play rhythm bones.  I soon changed my stage name to Spike Bones. I gather my performance bits and pieces from the period 1840-1940, an era I call pre-TV entertainment. I have developed a lot of my character and material as a street performer in Chicago and New Orleans. Although I have played with a lot of Irish, Old-Time, Folk and Jazz bands, I consider myself as much a dancer as a musician. A nineteen year old membership with RBS has provided me with great inspiration, friendships, and rhythm bones insight into the art and history of rhythm bones.”

Darryl ‘Spike Bones’ Muhrer was born in Columbia, MO on December 15, 1943, and went to high school and college there. He earned a Master’s Degree in Education from Northwestern University, and later studied educational technology and video production. He served in the Army, taught broadcasting at Northeast Missouri State University and led classes in creativity and organizational change for the Department of Energy. He has been an artist in residence and substitute teacher with the Chicago Public Schools. He has two sons and three grandkids. He returned to Columbia in 2010 to look after him mom, Madaline, who passed in 2015. She loved attending Bones Fests.

While in Chicago, Spike put on a show in Lincoln Park Zoo performing on weekends near the lion house. For over 20 years.