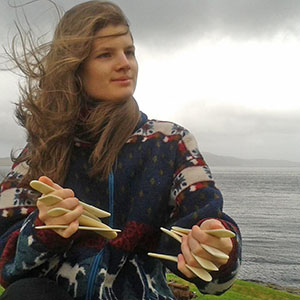 Annika Mikolajko-Osman, a new Rhythm Bones Society member, contributed the article on rhythm bones notation that begins on Page 4. She was born and raised in Poland. She is Master of Music and Vocal Arts, coloratura soprano, musician, multi-instrumentalist, pedagogue, sailor, graduate of the Academy of Music in Krakow at the Faculty of Artistic Education and Rhythmics, Vocal and Acting as well as a graduate of the Academy of Music in Katowice. She performs opera, operetta, musical, oratorio, choral music, film music and contemporary music.

As part of her involvement in promoting the maritime culture, she published a book in 2017 entitled  Shanties as a Vehicle of Musical Education Amongst Seamen in the Age of Sail.

Annika has played rhythm bones since 2012. She trained her skills using all available sources of books and films. From 2013 she was (as a rhythm bones player) a member of a shanty duo, which appeared at several editions of the International Sailing Song Festival “Shanties” in Krakow. She is also a member of “MozarTap & Bones” with which she performs as part of events promoting American tap dance with playing rhythm bones.

As part of popularizing rhythm bones in contemporary music, Annika premiered among others a piece by Natalia Wojnakowska, “Talam I”, for rhythm bones  and contemporary cello, and the arrangement of Lucian Berio’s song, “Azerbeijan Love Song.” for string duet, piano, voice and rhythm bones.