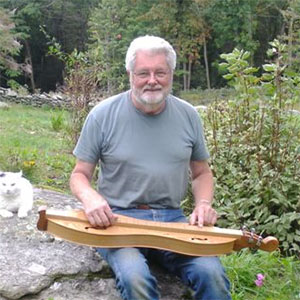 I have been making bones for about 15 years. I learned from a musician friend of mine who had a retail shop and wanted some bones to sell but didn’t know where to get them. So he showed me a pair and the rest is history. I now make them out of almost every kind of wood I have. Most are made from native woods but I also make them out of exotic woods when I have some. You name the wood and sound and I either have made or do make them. Most hardwoods are somewhat loud to loud with varying degrees of brightness and mellowness. These woods include black walnut, cherry, oak, maple, osage orange and the like. Woods like red cedar, western red cedar and similar woods are softer and more mellow. Not everyone wants to stand out in a crowd and they like a more quiet sound.

I cut my bones on a bandsaw with a jig I made to cut the same angle every time. I then sand them on a belt sander and an inflateable sander after rounding the edges on a router. There isn’t much to a set of bones, but it takes more labor than what I can get out of them. If I wasn’t a frustrated percussionist and understand that there are a lot of folks out there like me I wouldn’t make them.

I have made thousands of pairs of bones selling most of them at craft shows over the years. I have them in several craft shops,galleries and the Country Store in Floyd, Va. Now I sell mostly through my website. Walter Messick