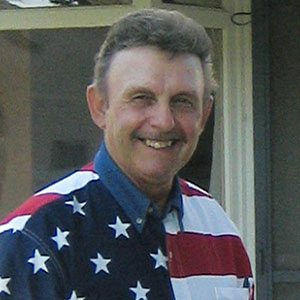 Jerry Mescher was born on March 6, 1941, to Albert and Ann Mescher. His hobbies were restoring tractors, flying his 1947 Piper Super Cub, and building airplanes. Jerry served in the National Guard and was an American Legion member.

Jerry grew up listening to and watching his dad play the Bones. By the time he was ten, he was ready to learn the instrument. Now Jerry was expected to help with all of the farm work, which he did. But when he became serious about learning to play the Bones, he would sneak down to the basement and work on carving out his own set from an old peach crate. After he had these made, he would listen to a radio station that aired polka music three times a day, and practice playing the Bones. Of course, more often than not, Jerry’s dad would have to force him to stop practicing because he needed to get outside and help with the farm work!

Jerry pressed on and was disciplined in his practicing. As he says, “One day I started to get something out of the Bones.” Also, because his dad was busy working the farm, he did not have a lot of time to encourage or help him with the bones. But, Jerry vividly remembers the day that he was practicing in the kitchen, and playing pretty good. The kitchen window was open. As Jerry was playing, he happened to look up, and saw his dad sitting under the tree that was just outside the window. Jerry opines that he believes that is the day his dad realized Jerry was serious about the instrument and just might be worthy of playing with him. By the time he was in eighth grade, he was playing with his dad. As Jerry tells it, “When we practiced, if I made one mistake, Dad would start the record over until I had his rhythms down, perfect.”

When Jerry was in the ninth grade he carved his own pair of Bones out of ebony. During this year, he won second place in a talent show held at the Coon Rapids High School. This win got him a place on the Bill Riley “Teen Time Talent Show” contest held at KRNT- TV in Des Moines, Iowa. Jerry went on to win first place in this contest.

In his junior year, he entered the speech contest held at Kuemper High School. His speech was about the history of the Bones, and a demonstration. Jerry won the district and regional contests in the category of “original oratory.”

Through high school, Jerry and Albert played for many different organizations and functions: the American Legion and Auxiliary, the Chicago and Northwestern Railroad Veterans, church groups, Kiwanis clubs, high schools. In 1957 they participated in a “Minstrel and Home Talent Show” held in the Ar-We-Va High School. For this program, Jerry and Albert were in “black face”. As a team, they not only played the Bones; they would, also, perform “dance routines” while playing them.

In the summer of 1960, Jerry heard that Venita Rich was holding a talent contest at the Denison Fair. (Ms. Rich was a talent scout for the Ted Mack Amateur Hour.) The winning prize was a trip to New York City to try out for a spot on the Amateur Hour. Jerry expressed his interest to his dad about their entering the contest. Albert’s response was, “That’s for kids.” Eventually, Albert conceded; they played at the fair; and won first place. Jerry and Albert were headed for New York the next summer!

In June, 1961, a bus was chartered, and along with other mid-west winners and Venita Rich, the Meschers set out for the Big Apple. The performance for Ted Mack would be televised on June 18. Once they arrived in the city, they were given time to visit all the sights: the Statue of Liberty, Radio City Music Hall,

By Wednesday, June 14, Jerry and Albert were in the television studio, performing for Ted Mack, in the hopes of winning a spot to play on the Amateur Hour. They did win that once-in-a-lifetime spot! The rest is history. On June 18, 1961, Father’s Day, Jerry and Albert performed on the Ted Mack Amateur Hour, playing their Bones to the composition, “Under the Double Eagle.” (An interesting side note: They had planned to perform to the tune “Jolly Polka,” but Lawrence Welk would not release the copyright to Ted Mack.) The Mescher Bones team had made it to the big time! And memories to last a lifetime.

Jerry and his dad continued to ply their craft until Albert succumbed to prostate cancer in 1967. Sadly, Jerry’s Bones partner was gone.

Jerry continued to play and perfect his beloved instrument. In 1987, he heard about a country music festival held every labor-day weekend in Avoca, Iowa. He and his wife, Sharon, spent the 1987 weekend in Avoca. For the first time, Jerry met other Bones players! He was amazed! Finally, he knew that he was not alone! He entered the Bones and Spoons Contest, and won second place. In 1988, the same thing happened – he won second place. The next year, 1989, Jerry expressed to Sharon that he was not going to go to the festival. Sharon’s response was, “You have to go, ‘cause you’re going to win the contest this year.” They did go to the festival, and Jerry won first place! This was a fortuitous win, as all the winners of the festival’s contests were going to participate in an Iowa Public Television program called, “Old Time Country Music.” So, in the fall of 1989, all of the winners and their spouses went to Johnston, Iowa for a weekend. During the weekend, Iowa Public Television taped four thirty-minute programs that would be aired in early 1990. Jerry was the only Bones player in the group, but there were guitarists, singers, piano players, fiddlers, and a saw player. Each person had his/her turn to perform.  IPTV did give each performer a tape of the programs.

Other milestones for Jerry have been: traveling to Austria with other country music musicians to participate in a festival; and playing for Sharon’s family in Ohio, New Mexico, and North Carolina.

One of the most recent important milestones for Jerry was the introduction to the Rhythm Bones Society. In 2000, Steve Wixson, a Bones player from Tennessee, attended the festival in Avoca. Here, Steve and Jerry met for the first time. Steve talked about the Bones Society and all that it offered. Since that meeting, life has not been the same. Jerry and Sharon have traveled to five different states to attend the Bones Festival. Here, they have met many other Bones players from around the world who have become life-long friends.

Through the years, Jerry would try to convince “someone” to learn the craft of playing the Bones. Eventually, his sister, Bernie, began getting serious about the instrument. She attended her first Avoca festival in 1999, and won first place in the Bones and Spoons contest. Jerry and Bernie have been playing ever since. Another “someone”, who finally decided she might be able to play the Bones, is Jerry’s wife, Sharon. She played for the first time at the Bones Festival in New Bedford, Massachusetts. Paraphrasing Jim Nelson, another Bones player, “Playing the Bones is a spiritual experience.” Once you pick up a pair, you can’t lay them down- you want to continue to learn from other players, and improve your craft.  Jerry Mescher

“An elegant, musical, generous and hard-working man, Jerry loved to share his gifts and his story. In Ireland we often use the phrase, Ni Bhehit a Leithéid Arís Ann (We shall never see his like again), when someone dies. Another saying that is often used to end an epitaph, De go raibh a anam dilí s (May his dear soul be at the right hand of God), which conjures up a comforting image of Jerry in the Heavens, reunited with his father, entertaining the souls of the departed, reminding themselves  and their celestial audience of the earthly pleasures of embodied music making.   Mel Mercier