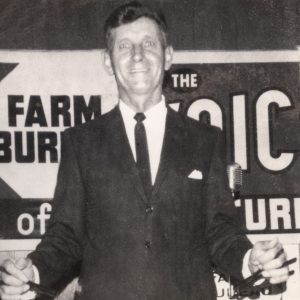 In the summer of 1917, Albert Mescher’s dad, Fred, took him to the Carroll County Fair in Carroll, Iowa. One can only imagine how excited a ten-year old might be in going to the fair! All the sights and sounds that a young boy of ten would take in: The carousel, the wafting smells of exotic foods in the air, candy to savor, and all the entertainment. Apparently, the entertainment of the day caught Albert’s attention.

After Albert married and had children of his own, he would entertain the family by playing his Bones. Just as Albert had been fascinated with the instrument, Jerry, his third child, became enamored with them. As a child, Jerry would ask his dad how he came to play the Bones. This is what Albert would tell him: When Fred had taken him to the Carroll County fair, he heard a minstrel band playing, and had to seek it out. Once he was standing near the band, he heard an unusual “tapping” sound eminating from one of the “end-men”. This man was keeping time with what looked like two pieces of wood held in each hand. The end-man was moving his arms from right to left, and as he did so, he would “tap” the pieces of wood together. Albert was not able to watch and listen to this intriguing sound for very long, as his dad was ready to leave the fair. Albert could not get that sound out of his mind.

Some time after being introduced to this sound, an itinerant farm hand happened to be picking corn for Albert’s dad. During this time, Albert, showing the farm hand the motion of the arms playing the instrument he had seen at the fair, asked the farm hand if he knew what the instrument was. The man told him they were called “Bones”, but he did not know how to play them. Before the farm hand left for work on other farms, he carved four “Bones” from an old pitchfork handle, and gave them to Albert. We can only imagine how happy Albert was to finally have something to play.

Another serendipitous moment took place soon after Albert had his first Bones. One Sunday, Albert’s family was enjoying an afternoon of music listening to their player piano. An itinerant family happened to be walking along the road near the farm, heard the music through the open windows, and came onto the farm to visit the Meschers. While this family was visiting, Albert took the opportunity to show his Bones to the family’s father, and asked him if he knew how to play them. The man showed him how to hold them in each hand; demonstrated the motion of the arms and hands; but, could not play them. Albert had his second lesson in the Bones.

Albert Mescher grew up during the years when people were using horses to travel and to farm. People stayed close to home. Sunday afternoons were the time when families gathered to visit, play games, or entertain themselves with music. So, as one pictures Albert as a young boy trying to learn this new instrument that caught his fancy, one has to imagine him learning in a vacuum. He had only two lessons in playing the Bones, and neither lesson was helpful in teaching him any techniques. Albert became his own teacher.

It is Jerry’s contention that Albert would sit at the player piano, pumping the foot stops, holding the pitchfork handle Bones in his hands, listening to the music, and, through trial and error, forming his own rhythms with the Bones so that the rhythms were in good timing to match the music. Because he had to hold the Bones away from his body while he sat at the piano and pumped the foot stops, Albert’s style of playing the Bones was born.