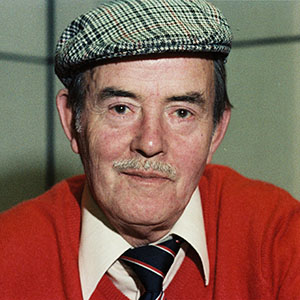 In 1974, at the age of 60, Peadar Mercier, a part-time traditional musician and member of the Chieftains, left his job as a building supplies store manager with G&T Crampton construction company in Dublin to embark on an international career as Ireland’s first professional bodhrán and bones player.

Herbert Peter Mercer was born in Cork, in 1914. His father, a Protestant Congregationalist, came from a Northern family of jewelers, clockmakers and silversmiths. His mother came from a Catholic family in Cork, which had strong connections to the Irish Volunteers. The Mercer family moved to Bray, County Wicklow, in the 1920s, and it was here that Herbert Peter’s interest in the Irish language and culture blossomed. Throughout the 1940s and 50s, he wrote poetry and songs, was a renowned debater, and indulged his passion for dancing at Conradh na Gaeilge céilís and at the Arcadia Ballroom in Bray. Immersed in this urban community of language enthusiasts in Bray, and making regular visits to Connemara to improve his Irish, Herbert Peter Mercer went through a process of identity transformation, and became Peadar Mercier.

The bodhrán first came to widespread notice in 1959 when it was played by the character of Carthalawn in John B. Keane’s play Sive. Its status as a musical instrument was elevated considerably in the following years, when the Irish composer and performer Seán Ó Riada took up the instrument as director of his newly formed group Ceoltóirí Cualann.

Peadar’s involvement in the Irish language scene led him to take up the bodhrán in his late 40s. At the time, in the late 1950s, the goatskin frame drum was hardly considered to be a musical.