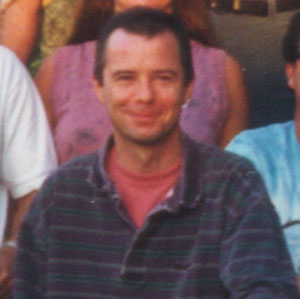 Mel Mercier is a special friend to the RBS, and, as one of the best bones players in the world, it is an honor to have him as a member of the Society and on our Board of Directors. He is a performer, teacher, composer, arranger, producer and student. Mel’s legacy is through his father, Peadar, who was part of the seminal Irish group, Ceoltoiri Cualann, organized by Sean O Riada who some credit as starting the modern era of bodhrán and bones playing. Some of the Ceoltoiri Cualann musicians, including Peadar, went on to form the now famous Chieftains.

Here is what Mel says about his early bones playing days. “Something in me always hesitates for a moment (in disbelief) when it hears me saying that I have been playing the bones for about thirty(?) years now! I don’t know exactly when I began to play but it was certainly in my early ‘teens if not before. My earliest bones-playing recollection sees me sitting in the bathroom of our house in Blackrock in Dublin n the early 1970’s playing along to the Chieftains as they rehearsed in our front room.”

Mel is one of Ireland’s most important percussionists and teachers of Irish and world music. His interests stem from his own performance on bodhran and bones but extend to Ghanaian drumming and the gamelan traditions of Java. His academic achievments include: a Bachelor’s Degree from University College Cork, a Fulbright scholarship, a visiting assistant professor of music at Connecticut’s Wesleyan University, and the Chair of the Music Department at the University of Limerick.

When asked where rhythm bones fit into today, “All I can say now is that rhythm bones playing is a celebration of life.” Steve Wixson