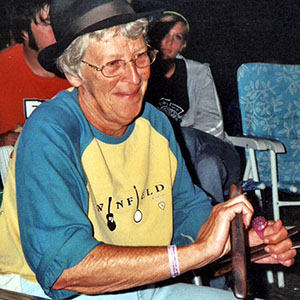 Mary Lee Sweet informed us that member Jean Mehaffey passed away. Not many of us knew her as she never attend a Bones Fest, however she was a contributor to our newsletter (see below). The following was excerpted from her formal obituary.

“Jean Rae Mehaffey, born August 1, 1942, in Atlantic, Iowa, also known as “the Sawyer” or “Bones” passed away Wednesday, August 21, 2019, at the age of 77, in Homosassa, FL. Jean’s early years were spent in Advance, Missouri, and Bellevue and Omaha, Nebraska, before returning to Atlantic, Iowa. She attended school through 8th grade in one of the last one room country schoolhouses in Iowa, before going on to Atlantic High School.

“Her passion for Bluegrass music led to expertise in playing rhythm bones and the saw. She placed third in the World’s Bones. competition in 1996. She traveled to the Winfield, KS, Bluegrass Festival where she was a member of the Carp Camp Jammers, and played with the Just In Time Old Time Band in Florida.  “Other hobbies she enjoyed were orchids, quilting, and genealogy.

“ In her memory, she would be so pleased if you would pick up an instrument, attend a music festival, or make a donation to a musical youth organization.”

Several RBS members met Jean at the NTCMA festival when it was held in Avoca, Iowa, and Steve Wixson met her again at the Walnut Valley Festival in Winfield, Kansas. She was a great rhythm bones player as Media below shows.

Several years ago Jean sent the following letter about herself.
“In 1976, I attended a music festival, an old timer played rhythm bones and I said,”that’s for me!” Then an old lady played the musical saw and I said, “ that’s for me!” I proceeded to find a little booklet that had instructions for rhythm bones and the saw, a few pages each, and taught myself how to play both. I have continued to play both for all the years since then.

“I have garnered 3 Florida State Old Time Music Championship wins and a third at the National Traditional Country Music contest in Iowa. Don’t do contests any more, don’t perform on stage, and teach only if someone is interested in my style of play, mostly at festivals.

“Additional information on my rhythm bones. They are made of Ziricote, about 9 inches long and have a slight curve. They are maybe an inch wide. I play two handed but always play one hand off the other, never together. That comes from teaching myself from a book! By the time I first played in public I had people telling me I should do it their way, but all I could say was, ‘it’s too late now to change!

“I mainly attend bluegrass festivals here in Florida, and my all time favorite, the big Walnut Valley Festival at Winfield, Kansas. It’s in it’s 48th year and I’ve probably made 35 of them (the numbers are updated from the original letter)!
“I have a neat idea with pictures for an additional story about bones in the Civil War. If you are interested, let me know.”

Jean’s article titled, “Rhythm Bones in a Civil War Prison Camp,” appeared in the Rhythm Bones Player, Vol 15, No 4. A Letter to the Editor about rhythm bones in a WWI prison camp was in the Vol 16, No 2 issue. Search the online newsletters to read.

There are a wide variety of camps at the Walnut Valley Festival, from a single tent to very elaborate combinations of RVs and other equipment. To see Jean and Carp Camp check out https://www.youtube.com/watch?v=cCQbsfxbqcE (Jean at 1:30 minutes into the video).