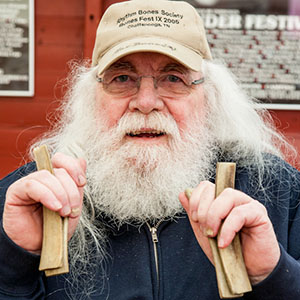 Member Yirdy ‘MacBones’ Machar, aged 71, passed away in 2018. He was born in Glasgow, Scotland, and lived in many different countries before settling down in Denmark some 35 years ago. He was divorced and the father of two children, and was a grandfather and a great-grandfather, too.

Since 1991 he lived in a wooden cottage under a large oak tree at the edge of a forest near Kattegat on the island of Zealand together with his soulmate Mette whom he met back in 1985.

As Yirdy’s father was a Naval Officer, and travelled a lot, his schooling took place in many different countries. He was however fortunate enough to spend some time in Kirkcaldy, Fife, Scotland, where he, because of his then bad hand writing, received special tuition from Tom Gourdie who was a prominent Scottish calligrapher, artist and teacher.

Yirdy left home at an early age and joined the UK Armed Forces. He served in Tabuk, Saudi Arabia, and also at The Royal Air Force Station located in Leuchars, Fife, Scotland, where he was a member of the Mountain Rescue Team.

After moving to Denmark Yirdy worked as a pub bartender in Copenhagen for some time until he got stabbed. Following that he devoted himself to the music and the calligraphy.

The Battle of Sowerby Bridge