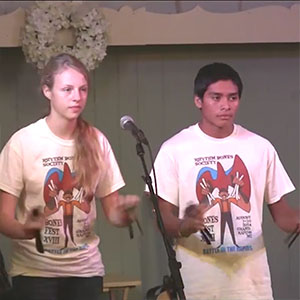 A dream of Jerry Mescher was to pass the rhythm bones playing to a young person.  In 2010, Jerry, Sharon, and Bernie held a rhythm bones workshop at the Le Mars National Country Music Festival.  At that workshop was a 10 year old Joseph, and after the workshop his father bought him a set of Jerry’s rhythm bones.  The next year, the family returned to Le Mars.  Once Joseph began to play, we were in awe at this young boy’s playing ability.  It was perfection.  By 2013, Joseph had taught his sister, Anika, to play.  She was playing in six months.  Both Anika and Joseph won the NTCMA Bones Championship.

Jerry’s dream of passing this talent came to fruition in these two young teenagers.  Sharon Mescher