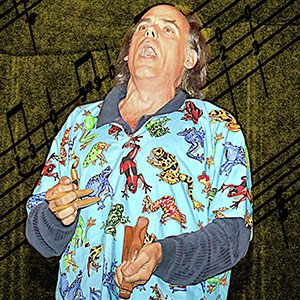 ADAM C J KLEIN was born in Port Jefferson, Long Island in 1960 and grew up split between nearby Setauket and world-away New York City. He is a self-taught traditional music singer/player/songwriter and an opera singer/composer with a Master’s degree from Indiana University School of Music, Bloomington.

By age 12 he was lining up different sized terracotta plant pots to play like xylophones, and at 17 he taught himself jaw harp, built his first dulcimer and started playing spoons after seeing a player at the Carter Family Memorial Music Center in Hiltons, Virginia. So at age 18, having recently found a cow skeleton in Frederick, Maryland, he first saw bones being played, by Jeff Warner, accompanying Jeff Davis playing The Falls of Richmond on the banjo, he fashioned a pair from the ribs and figured out some rudimentary technique.
After meeting Percy Danforth at the Croton Clearwater Revival folk festival in 1981, it was all over: he then began making bones from wood, more or less after Percy’s design. When he returned to Croton the following summer to show Percy his creations, Percy wasn’t there, but people wanting bones were there and he sold out the dozen or so pair he’d brought with him. He’s made rhythm bones off and on ever since.

Meeting Steve Brown at his table at NEFFA in 2001 or so, he noticed some more artistic shapes, which prompted a flurry of radical design experiments with the ultimate purpose of increasing the tonal range and varying the volume of the instrument beyond what one pair can be made to do.

As Adam recounts, “…I use my bones primarily as the main accompanying instrument to some songs that I sing. I’ve been heard at Bones Fests V, XVIII, and XIX rattling along while singing, “Pick a bale of Cotton”, “John Henry”, and the opera aria “Quest’o quella” from Rigoletto. I played bones in a real opera, Susannah, in Central City, CO, in 1997.

“I have taught scads of people to play bones, and along with Constance Cook have developed an effective teaching method for youngsters, grades K through 6. Bones are excellent instruments to lure children into the wider world of music,…and can be mastered quickly by most kids…”

Letter to the Editor – 2011. ve made many experimental shapes in the interest of changing the timbre, generally meaning lowering it and/or giving it a more discernible pitch closer to what claves sound like. That paired with my sci-fi interests inspired me to shape bones that mimic that famous Klingon weapon, the Batleth. I thought it made a more interesting photo than two conventional pairs. There are 3 or 4 other shapes that hopefully very soon will be for sale at my website. The Batleths are some of the most playable, I made them from maple and cherry: the ones in the on-line photo are pine. See another photo of them at http://www.adamcjklein.us/bones.html.  Adam Klein