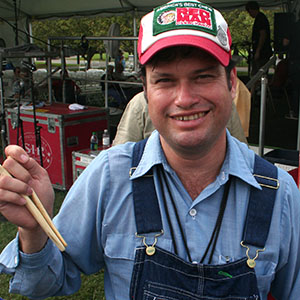 Matt Kinman is an old time musician who plays many instruments including fiddle, guitar, banjo, mandolin, and rhythm bones. Matt, thirty eight years old, actually grew up playing old-time music. He appears regularly with the Roan Mountain Hilltoppers and the Pea Ridge Ramblers. He has performed with Old Crow Medicine Show, Mike Seeger, Tennessee Mafia Jug Band, and others. “It was an old-time band that started the Grand Ole Opry, and they were playing fiddle tunes then,” says Kinman.

He and a friend, Jonathan Farrell, played in Chattanooga a few weeks back. I had the feeling that the two were jamming in his front room and that we were just sitting there listening to them. They played old time Americana music and the newest song they played was by Jimmie Rodgers.

My only regret was that he played rhythm bones on only one song, but it was some fine bones playing. He would occasionally hit the rhythm bones against his other hand or his knee to get an extra click.

After the show I got to spend some time with him. He learned to play one-handed bones from his father when he was about 8 years old and his father learned from a sailor who was 103 at the time. Matt plays shin bones that came from England (however they don’t look like Nick Driver shin bones that several of us play.) He introduced Dom Flemons of the Carolina Chocolate Drops to the rhythm bones.

After his previously mentioned rhythm bones song, he told this story about musician John Hartford. He was jamming with John and others and such sessions quickly became Hartford sessions. Matt started playing his rhythm bones and John yelled out, “No Bones.”

You can see how he teaches rhythm bones at http://www.youtube.com/watch?v=ssMEbMYkOX8&feature=related.