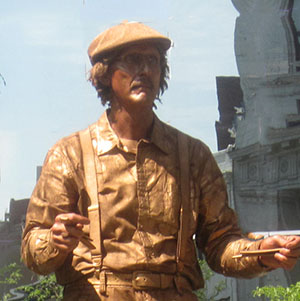 I have been a solo musical performer since I was 15 years old. I purchased and was taught to play rhythm bones about 40 years ago at the Wheatland Music Festival by Percy Danforth (see the photograph below). After college I joined a five piece traditional Celtic band called the Kwils for about twenty years. Before disbanding in 2004, we produced two CD’s, performed all over Midwest Michigan and even got to play in Ireland for the locals. All band member were very talented and could play more than one instrument, therefore we were able to come up with some pretty dynamic arrangements. As a result at the conclusion of each sets our audiences heard sounds coming from at least 12-15 different variety of instruments.

Yet, during our breaks, guess what instrument that someone from the audience almost always asked; “What were those things you were clacking in your hands?” of course it was me and the instrument was rhythm bones. The problem was when that happen time seem to stop! Next thing I knew our break was over and the other band members were calling me back up to the stage. Like most rhythm bone players, I never could just tell someone what the bones are, I have to explain a little bit about the history, what they are made out of, the differ sounds you can make, always followed by a mini lesson. It is just who we are and what we do….and it is why we all keep an extra set of bones with us at all times!

In 2014, I observe a friend performing as a human statue that lead me on a journey to expand on my entertainer’s repertory. For the next year I spent countless hours researching the art, designing and creating my outfit, decided on the name of Celtic Kilroy: The Irish Street Musician, and perfecting the skill. My character is modeled after musicians that are often buskering in front of the pubs in Ireland. The unique thing about my character is that I come to life playing a few lines of a traditional Irish tune, then turn back into a statue. Of course one of the first instruments I bronzed to match my statue look were a pair of rhythm bones. Initially I began performing in DT Grand Haven & Grand Rapids. My big break came a year later when I was hired to perform at the Michigan Irish Festival, where I was discovered by Ed Ward from Milwaukee, the founder of the largest Irish Festival in the nation. Since then I have been performing at the Milwaukee Irish Festival, one of the favorite attractions of the event.

As a side note, my mother’s maiden name was Rita Jenette Cowett. She was raised in a small town near Boston, Massachusetts called Weymouth. Although I never met my long lost cousins in Greensboro, NC, could rhythm bones simply be in their blood?