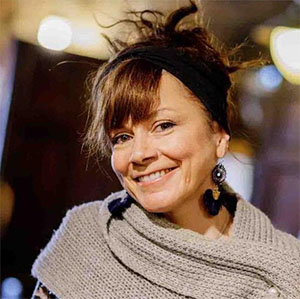 Roscommon born Cathy Jordan has been a professional singer with traditional group Dervish for over 25 years now. She is a singer, songwriter and multi-instrumentalist, playing guitar, bouzouki, bodhrán and bones player. She has led Dervish as front woman through thousands of concerts in hundreds of cities in nearly 40 countries. The most notable perhaps were performances at the Great Wall of China and the biggest rock music festival in the world – Rock in Rio to over 250,000. [From her website]

Letter to the Editor 2002. Yes indeed you have found another female bones player and I have played for eleven years or so now. My teacher was another female bones player, the mighty Monica Sullivan. In fact here in Sligo (Ireland) I know another three female bone players which is very healthy for the tradition. I play bones at every concert and try to have them on every album. They are featured a few times on the Live in Palma album. Now I’m going to rest my weary bones. All the best. Cathy Jordan