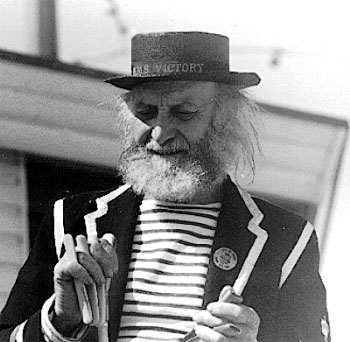 A few memories of my late friend and bones mentor, Erik Ilott, the “Bristol Shantyman”. I first met Erik somewhat more than five–and–twenty years ago at a folk–song club in Grimsby, the once–great fishing port on the East Coast of England. It was an occasion that had a significant effect on the turn of my musical life. Erik had ventured north from his home port of Bristol to entertain us as “The Bristol Shantyman”, at our folk–club held at an old Grimsby pub, the Royal Oak, just a stone‘s throw from the town‘s commercial and fish docks. At that time I was working on the Tugboats of the River Humber, serving the ports of Grimsby, Hull and Immingham, probably the busiest estuary in the UK after the Thames. Luckily the folk–club that evening did not clash with the tides! I was there because of my interest in sea songs and shanties and I had never come across the ―Bones!

When Erik played, he “had the audience in the palm of his hand with his songs of the sea and the stories of some of his experiences in His Majesty’s Navy during the Second World War. He would play at various times with 3 bones in one hand and 4 in the other. He used cow bones mostly. I treasure the bones he gave to me.”

There are so many memories of Erik, but here are several: playing the concertina; being an honorary member of dance groups; at one time being a champion racing cyclist; and, he could be irascible when driving his car.