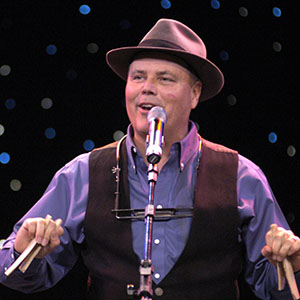 Holt’s great-great-grandfather, John Oscar Holt, is believed to have carved and played a set of wooden rhythm bones, which have remained in his family. John Oscar Holt carried the rhythm bones with him when he relocated his family from Alamance County, NC to Texas in 1858.

“We’ve passed the tradition of playing bones and spoons down from generation to generation,” David Holt said in an interview from his home in Fairview, located outside of Asheville.

Holt learned how to play at the age of 9 or 10 from his father, the late William “Joe” Holt, and his son, Zeb, now 40, learned when he was 12.
“Kids love rhythm, so it’s been fun for our family,” he said. When he looks back on his life, Holt said he believes that the love of music could’ve been passed down from his Alamance County ancestors.

“That sound really opened my ears to music,” he said of playing rhythm bones.

Playing rhythm bones is something he still does on stage although those bones were collected from cow bones on a cousin’s ranch in Texas: “Ribs from a long dead cow skeleton bleached.