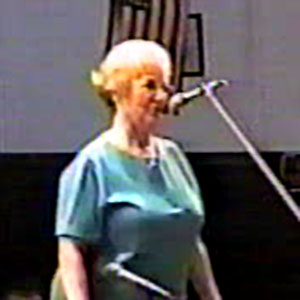 Ann Hoffman gave rhythm bones some national TV exposure when she appeared on the World’s Funniest Videos TV show.  She attended Bones Fest IV where a video from her national appearance  was shown (see media below).

At the Fest, Ann told us she was part of several musical entertainment groups over the years and enjoyed playing the folk instrument of rhythm bones. And she was a paid rhythm bones player.  She enjoyed singing and especially enjoyed accompanying husband Harold as he played guitar.